Okinawa, Japan birthplace of modern day karatedo and kobudo.
Historians believe that the art of Okinawa Te, first originated
independently of any other combat system. This system on unarmed combat can be traced back over 1000 years. The islanders were of not of wealthy status, weapons were scares. The islands own on-unification gave rise to many aggressive warlords, each battling for supremacy of the island. As a result
these circumstances rendered a strong incentive for the evolvement of unarmed combat. 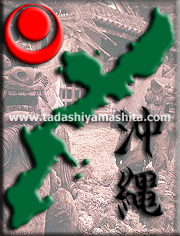 By the mid 1340's, Okinawa entered into a trade relationship with China. This trade and political friendship allowed the Okinawan people to observe the different aspects of China,
and were thus exposed to Chinese boxing systems. Furthermore, by the late 1300's, in a tributary relationship, 36 Chinese families and businessmen settled on Okinawa. These families brought with them a variety of skills, including Chinese martial arts.

Through the 1400's, the island experienced much turmoil. At first the island was unified by King Sho Hashi in 1429. At this time the Okinawan's were still able to posses weapons. However in 1470, King Sho Hashi destroyed the former dynasty and made due with his own. Soon all arms were banned on the island, in fear that the reign might be over thrown. As a result, the emphasis on the fighting arts further progressed. The main villages of Okinawa are credited with the main styles that emerged from Okinawa Te. From the village of Shuri, came Shuri Te.
From the village of Naha, came Naha Te. Finally from the village of Tomari, came Tomari Te.

These styles of unarmed and armed combat were practiced in secrecy for years. Differences between Te styles suggest the different influences of various Chinese styles. Shuri-Te seem to utilize the external system of Shaolin boxing. While Naha-Te incorporates the use of internal Taoist techniques.  Tomari-Te appears to be a mix of both internal and external fighting systems. These variances alone, are responsible for the evolvement the different systems into the distinct martial art styles they are today.

In 1609, Okinawa was seized by the Japanese Satsuma Samurai clan, for refusing to recognize Japan's newest Shogun, Tokugawa Ieyasu. As a result, the Shogunate banned the Okinawa people from carrying weapons. This only further fueled the importance of further developing the martial arts as a means of survival.

Although at this time the Japanese had banned all trade relationships with other countries. The Japanese still, however, allowed Okinawa to trade with China.