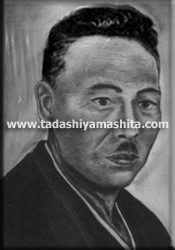 Shinko Matayoshi, along with Gichin Funakoshi, was the first to publicly demonstrate Okinawan kobudo to mainland Japan in 1915. With the 1921 royal visit of Emperor Hirohito on Okinawa,Matayoshi performed kobudo at a demonstration with Naha-te master Chojun Miyagi.

Shinko Matayoshi = (1888-1947)  Founder of modern day Kobudo, was born in the Naha region from a wealthy family. His kobujutsu training began in his early teens and included kobujutsu, kamajutsu, ekujutsu, tonfajutsu and nunchakujutsu. At the age of 22, he ventured into Manchuria by way of northern Japan. There he joined a team of mounted bandits and learned several other weapons arts, including the bow and arrow, all from horseback making them unique from other Okinawan Kobujutsu styles. Later, after returning to Okinawa, he traveled to Fuchow and Shanghai were he learned even more weapons arts in addition to acupuncture, herbal medicine and another form of Shaolin boxing.